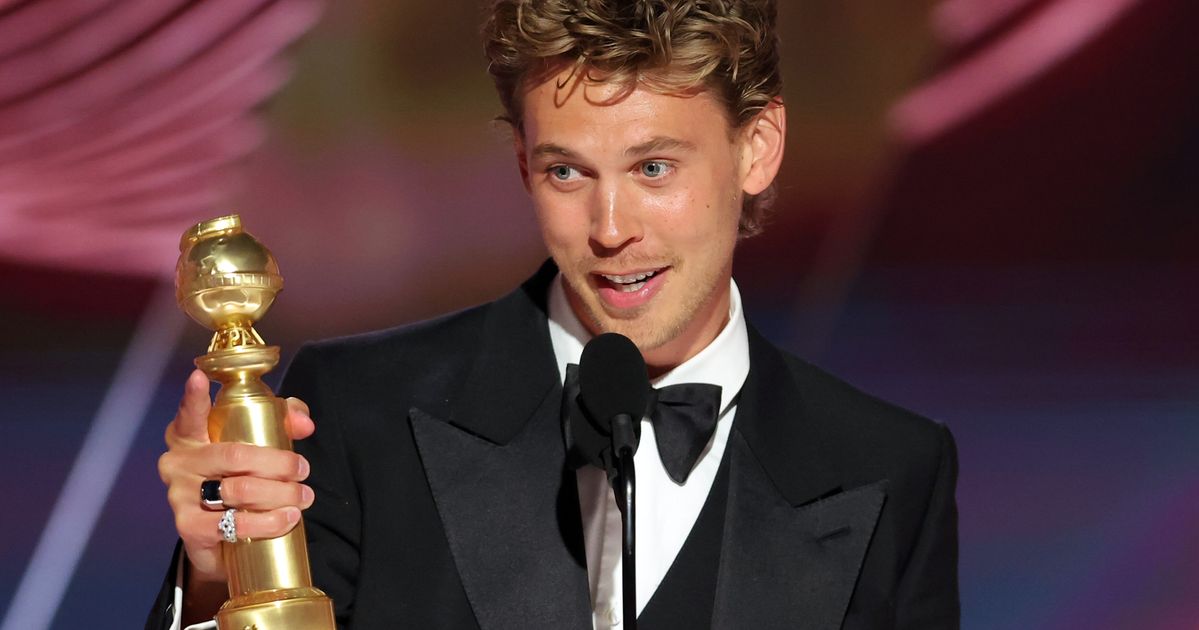 The King of Rock ‘n’ Roll ― or rather the actor who played him ― is now a king of Hollywood, too.

On Tuesday, Austin Butler received the Golden Globe Award for Best Actor in a Motion Picture for his portrayal of Elvis Presley in Baz Luhrmann’s “Elvis.” The actor, a first-time nominee, dashed the hopes of those wanting Brendan Fraser to cement his Hollywood comeback with a win for “The Whale.”

“Oh, man, all my words are leaving me. I just am so grateful right now. I’m in this room full of my heroes,” Butler said, singling out his “Once Upon a Time in Hollywood” co-star Brad Pitt and director Quentin Tarantino.

“I owe this to a bold, visionary filmmaker who allowed me the experience to take risks, and I always knew I would be supported,” he continued. “Baz Luhrmann, I love you. Thank you for believing in me in those moments that I didn’t even believe in myself. I’m so grateful to you. I also want to thank my dance partner, the greatest dance partner I could have ever hoped for, Mr. Tom Hanks.”

After thanking Presley himself, Butler didn’t miss a beat when the pianist began began to play him off.

“You could at least play ‘Suspicious Minds’ or something,” he quipped, referring to Presley’s 1969 hit.

Until Tuesday, Fraser had been widely seen as the front-runner for the award. The actor has received widespread acclaim for “The Whale,” in which he portrays a reclusive gay man living with obesity.

As had been expected, however, Fraser was a no-show at the Golden Globes. In 2018, he accused Philip Berk, the former president of the Hollywood Foreign Press Association, of having groped him at a Beverly Hills luncheon about 15 years earlier. The HFPA is the organization behind the Golden Globes.

Fraser alluded to that alleged history last November, when he said he would not be participating in the Golden Globes. “My mother didn’t raise a hypocrite,” he told GQ. “You can call me a lot of things, but not that.”

Many on social media suggested that Fraser’s claims hurt his chances of winning.

Brendan Fraser deserved, but we already know why he didn’t get it. We’ll see him at the Oscars. #GoldenGlobes

Look, Austin Butler was amazing in Elvis, but I can’t help but question if the reason Brendan Fraser didn’t get the Golden Globe is out of spite/revenge. Still love that to this day, he’s stood his ground and refused to attend the ceremony tonight ♡

Still, “The Whale” has drawn some backlash, too. Some viewers have criticized the decision to cast Fraser, who wore a fat suit and prosthetics onscreen, instead of an actor with a larger body.

Fraser, however, has argued that the film avoids fatphobic tropes by presenting Charlie as a “well-rounded character” instead of an antagonist or a punchline.

“He’s not the person who we so often dismiss. He’s a man who lives with obesity, but he’s also a father and he’s also a teacher,” Fraser told The Hollywood Reporter last month. “The empathy that I think we all felt shooting this movie and telling [screenwriter] Sam Hunter’s story is something that’s intensely personal to all of us.”

Anna Kendrick Opens Up About An Abusive Ex: ‘I Have So Much Shame For Not Leaving’