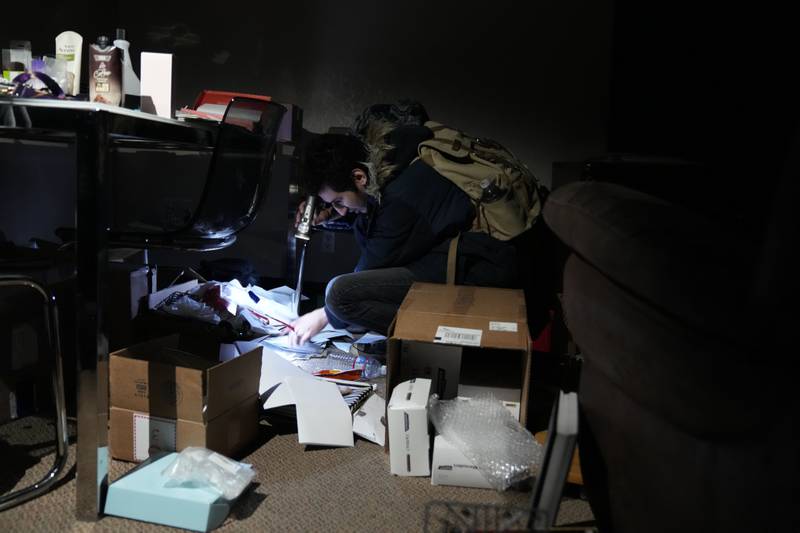 Thousands of homes and businesses along the Northern California coast remained without power Tuesday evening, nearly a day after a powerful earthquake shook homes from foundations, injuring at least 12 and leaving many without water. left.

“It felt like my roof was coming down,” said Cassandra Stoner. “The only thing I could think of was, ‘Get the rambunctious kids out.'”

When the ground stopped shaking, the Stoner family was fine—one daughter even slept through the racket. But when she showed up to work at Dollar General, she found tiles had fallen from the ceiling, shelves were uprooted and the contents of the discount store she manages were strewn across the floor.

The magnitude 6.4 earthquake struck at 2:34 a.m. near Ferndale, a small community about 210 miles (345 kilometers) northwest of San Francisco and close to the Pacific coast. The epicenter was offshore at a depth of about 10 miles (16 kilometers). Several aftershocks followed.

Pacific Gas & Electric had restored power to about 40,000 customers — more than half of the original 72,000 who were affected — as of late Tuesday. The utility said it expected power to be fully restored within 24 hours.

Residents of the region known for its redwood forests, scenic mountains and the famous marijuana crop of the three-county Emerald Triangle are used to earthquakes. But many said it was more violent and unnecessary than the normal rolling motion they experienced.

“You could see the floor and the walls moving,” said Araceli Huerta, who was still shaking nearly 10 hours later. “It felt like a freight train passing by my house.”

Damage to buildings and infrastructure is still being assessed. Two Humboldt County hospitals lost power and were running on generators, but the scale of damage appeared minimal compared to the earthquake’s strength, according to Brian Ferguson, a spokesman for the California Governor’s Office of Emergency Services.

The Humboldt County Sheriff’s Office said about 12 people were reported injured, including a broken hip and head injuries. Two people died – an 83-year-old and a 72-year-old – because they could not get timely care for “medical emergencies” during or shortly after the earthquake.

During a news conference in Sacramento, emergency services director Mark Gilarducci said damage was mostly concentrated in the small communities of Rio Dell, Ferndale and Fortuna.

Officials said after a partial assessment that in Rio Del, a village of about 3,000 people where the destruction was worst, at least 15 homes were severely damaged and deemed uninhabitable and another 18 were moderately damaged. . He estimated 30 people were displaced and said the number could rise to 150 after a full count of the damage.

The city’s water system was shut down for repairs for two days due to the leak. Portable toilets were installed at City Hall and water was being delivered to the fire house.

A bridge built in 1911 over the River Eel, the main route into Ferndale, was damaged and closed to traffic, requiring a detour through the mountains to reach the quaint Victorian town Where Main Street is on the National Register of Historic Places. ,

Carolyn Titus, former owner of the Ferndale Enterprise newspaper, said the quake only broke a few windows on the storefront. In her 140-year-old home, plants were toppled, her coffee bar fell to the floor, pictures fell off the wall and books fell off the shelves.

Since a magnitude 7.2 earthquake hit the region in 1992, injuring hundreds, starting fires and destroying many homes, building codes have required retrofits to make structures more resilient to shaking Titus said.

Still, she said, each strong earthquake produces the same fear: “Is this it. Is this a nine-pointer?”

In an echo of the 1992 earthquake, the volunteer Rio del Fire Department was initially delayed in responding to some 60 calls, including two fires, because garage doors were locked and had to be unlocked, said Chief Shane Wilson. Three decades ago, houses in nearby Petrolia burned down because the firehouse garage door jammed and engines got trapped inside.

State Sen. Mike McGuire, who represents the area, said the power outage involved the main transmission line that runs through the area and that Pacific Gas & Electric’s restoration work had been slowed because the rains prevented the use of a helicopter to assess the damage. use was discontinued.

Humboldt County has about 136,000 residents and is in a part of the state with a long history of large earthquakes, including magnitude 7.0 in 1980 and 6.8 in 2014, according to the California Earthquake Authority.