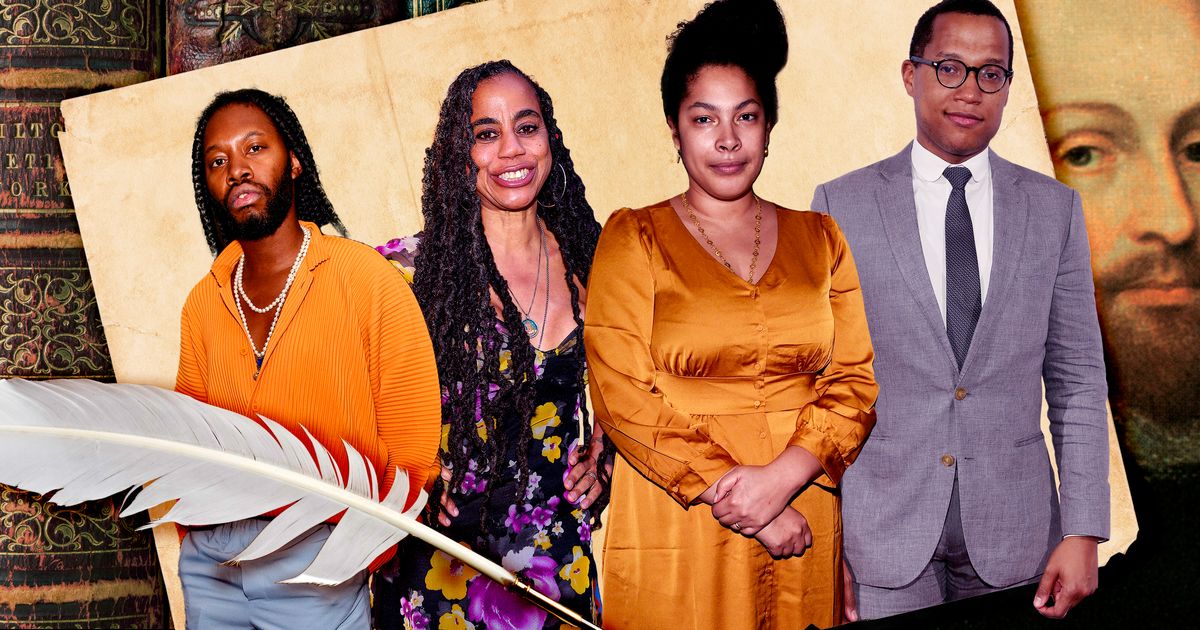 In “An Octoroon,” the character BJJ laments the plight of being a Black playwright.

“I can’t even wipe my ass without someone trying to accuse me of deconstructing the race problem in America,” he muses in Branden Jacobs-Jenkins’ Obie Award-winning play.

Shortly after, an actor playing Dion Boucicault enters for a drunken tirade. Boucicault is a 19th-century Irishman who wrote “The Octoroon,” the play on which Jacobs-Jenkins’ work riffs.

“You people don’t even know who I am,” he slurs, “a fecking world-class famous fecking playwright.” He goes on to note that every “10 seconds you’re reviving some one a Shakespeare’s bullshits.”

While Boucicault isn’t the most pleasant or socially conscious messenger, he (and Jacobs-Jenkins) have a point. Each year, when American Theatre releases its list of the season’s Top 10 Most-Produced Plays and Top 20 Most-Produced Playwrights, William Shakespeare is “set aside” because he always comes out on top.

Certainly, neither Shakespeare nor Boucicault faced the same expectations that BJJ describes in his opening monologue. Even so, scholars and movements in Shakespeare studies are currently putting Shakespeare’s plays in conversation with systemic racial inequality in America. If the theater is, as playwrights like Jacobs-Jenkins hope, a space to catalyze political change as well as entertain, what role does Shakespeare’s centuries-old canon play in the theater’s relationship to racial justice movements today, if any? How might we read, produce and perform Shakespeare’s plays in ways that center Black lives?

Over the past two years, I’ve been exploring answers to these questions at William & Mary in my “Black Lives in Shakespeare” course. The class pairs five of his plays with work by contemporary Black playwrights whose plays very specifically think through transformative racial change. My students and I read these plays alongside Black scholars to explore the question of Shakespeare’s continued relevance to “whatever it is you learn from the theater,” as Jacobs-Jenkins says in the aforementioned monologue: “Sympathy? Compassion? Understanding?”

Black theater artists are — and have been for centuries — “helping Shakespeare speak,” so putting contemporary plays concerned with racial justice in direct conversation with Shakespeare in our classrooms, theaters and talkbacks continues this work.

The most obvious way to put Black playwrights in conversation with Shakespeare is to produce and teach adaptations. In my “Black Lives in Shakespeare” and “Black Playwrights” courses, I teach a unit on adaptations of “Othello” featuring Keith Hamilton Cobb’s “American Moor” and Toni Morrison’s “Desdemona.” As its starting point, for example, Morrison’s play takes Desdemona’s reference to her mother’s maid, Barbary — a name that means “foreigner” and suggests the coast of North Africa — and the willow song she died singing as powerful suggestions of a ghost that hovers in the margins of “Othello.” This ghost partakes in a legacy of derogatory icons of Black women, the “mammy” trope in particular, and the myth of a Black female servant who wholeheartedly cares for her master’s children.

“Myths are more than made-up stories,” scholar and activist Dorothy Roberts teaches us. “They are also firmly held beliefs that represent and attempt to explain what we perceive to be the truth. They can become more credible than reality, holding fast even in the face of airtight statistics and rational arguments to the contrary.”

Shakespeare’s canon is replete with these myths and figures, which often seem “more credible than reality,” and contemporary plays can help us see the work these figures do in our cultural imagination. “Desdemona” takes this myth and transforms it to illuminate a character often sidelined in stage productions of “Othello” — Barbary, whom Morrison renames Sa’ran.

In my scholarship and my teaching, I make it a point to attend to ghosts like Barbary in Shakespeare — and teaching him alongside plays by Black playwrights with more thematic overlaps, as opposed to direct adaptations, helps me to do so.

By teaching “The Merchant of Venice” with Suzan-Lori Parks’ “Venus,” I center the figure of an abused, impregnated Black woman, passed around from man to man, clown to clown — a figure at the heart of “Venus” who makes only a brief appearance in Shakespeare’s play. Parks’ play paints a picture of a fictionalized Sarah Baartman consumed by white society, handed over from one abuser to the next. A “Mother Showman” steals the Hottentot Venus’ tips after she performs in freak shows. A doctor reads off a catalog of her body parts during intermission, foreshadowing the experiments to come. Despite being studied by physicians in the service of gynecological knowledge, Baartman is forced to abort two children she conceives with the Baron Docteur (Parks’ nod to Georges Cuvier, a French scientist whose work bolstered scientific racism). Even the “Negro Resurrectionist” who accompanies Venus across time betrays her in the final scenes.

“The possibilities for putting Black playwrights in conversation with Shakespeare are truly endless.”

Similarly, in an exchange often cut from productions of “The Merchant of Venice,” Lorenzo, Shylock’s new Christian son-in-law, enters and interrupts an exchange between his wife, Jessica, who recently converted from Judaism to Christianity, and Launcelot, the clown, who is questioning this conversion. Jessica informs her husband about this line of questioning, and Lorenzo tells Launcelot he has no business telling his wife she’ll find “no mercy… in heaven,” since Launcelot himself has impregnated a Black woman.

“I shall answer that better to the commonwealth than you can the getting up of the Negro’s belly; the Moor is with child by you, Launcelot,” Lorenzo admonishes.

“It is much that the Moor should be more than reason; but if she be less than an honest woman, she is indeed more than I took her for,” Launcelot responds.

To center this pregnant, Black woman, who appears to be marginal in “The Merchant of Venice,” means a radical writing of the play, and of what scholars and theater practitioners have focused on. In one of the only extended considerations of this Black woman in scholarship on Shakespeare, Kim Hall argues that it “may be that this pregnant, unheard, unnamed, and unseen (at least by critics) Black woman is a silent symbol for the economic and racial politics of ‘The Merchant of Venice.’” And yet this exchange is often glossed over in classrooms, left out of productions. Putting Shakespeare in conversation with Parks brings “the Moor with child” into sharp focus, however. While she might be “unheard, unnamed, and unseen” in the world of the play, much like Parks’ Venus, she does not have to be marginalized in our world today.

The possibilities for putting Black playwrights in conversation with Shakespeare are truly endless: Jeremy O. Harris’ “Slave Play” invented “Antebellum Sexual Performance Therapy.” It is described as “a radical therapy designed to help Black partners reengage intimately with white partners from whom they no longer receive sexual pleasure.” That idea makes the relationships between Black men and white women in “Othello” and “Titus Andronicus” read quite differently.

Harris’ play calls us to imagine productions and classroom discussions that hesitate to take Othello and Desdemona’s love for one another at face value, and to consider Desdemona’s persistent entreaties to come away to bed as a sign of possible fetishization of Othello’s sexuality.

When I read “Slave Play” in conversation with “Othello,” I wonder about Desdemona pitying Othello for the “dangers [he] had passed.” I think more deeply about Tamora’s “insatiate and luxurious” desire for Aaron the Moor in “Titus Andronicus.” Often in American literature, as Morrison teaches us in “Playing in the Dark” (1992), interracial relationships represent little more than “a bout of jungle fever.” By reading Harris in conversation with Shakespeare, it becomes clear how crucial it is to consider these historical touches across time. (I love the idea of falling in love with someone for the stories they tell, and I cherish Tamora’s imagined “golden slumber” with Aaron after their “pastimes are done.” These readings do not foreclose alternate takes on the play; they inform them.)

I also teach Jackie Sibblies Drury’s “Fairview” alongside “Titus Andronicus.” Though the plays were written centuries apart, and are very distinct, the characters Aaron and Keisha both fight back against the narratives assigned to them by white society. Aaron is far from a hero in “Titus Andronicus” — he sets the seeds for Lavinia’s rape, murders a nurse, cuts off Titus’ son’s hands and sends them back to him. But this violence is in response to the “white-limed walls” that enslave him, that work to fashion his son, whom he loves, a “loathsome toad.” Aaron resists the narratives told about him; he takes them and turns them on their head.

“Is black so base a hue?” Aaron asks the Nurse who describes his child as a “joyless, dismal, black, and sorrowful issue” ― “coal black is better than another hue.” In his closing monologue, Aaron speaks my favorite line of the play: “Why should wrath be mute and fury dumb? … I am no baby.”

Similarly, Keisha finds herself trapped in the narratives white people have told about her — those who have told her “every story [she has] ever heard.” That she’ll become pregnant as a teenager, that her father is a cheater and gambler about to lose their house, that her mother is on drugs. None of this is true, yet Keisha finds herself unable to get out from under these stories until the play’s end, when she rejects Suze as her grandmother, refusing her suffocating care.

“I wanna take care of the baby,” Suze begs, to which Keisha responds, “There is No Baby.”

Drury’s capitalization of this statement emphasizes that Keisha is not pregnant, but also that, like Aaron, Keisha is no baby — she does not need Suze’s “loud self,” “loud eyes” and “loud guilt” caring for her. “Do I have to keep talking to them,” she asks audience members, referring to the play’s white viewers ― “only to them until I have used up every word?”

It’s probably true that Black playwrights often feel the same way about being in conversation with Shakespeare, his seemingly inescapable presence. But these plays I assign alongside Shakespeare place extraordinary faith in their respective audiences. They generate transformative conversations.

“We can stop the racism in theater and in our lives if we can make the space and time for learning and listening,” Hall notes in her introduction to “American Moor.”

It’s difficult to make this space and time, though, if we do not listen to what Black voices are telling us about Shakespeare’s plays, directly or indirectly. This is what contemporary Black playwrights have taught me — that Shakespeare is, in some ways, only as good as he speaks to this “American form,” as Cobb writes in “American Moor.”

These conceptual connections aren’t always evident, and putting these plays in conversation across centuries and landscapes isn’t easy. But as Cobb’s actor tells audiences: “God knows I ain’t easy… but no future worth the havin’ ever was.”