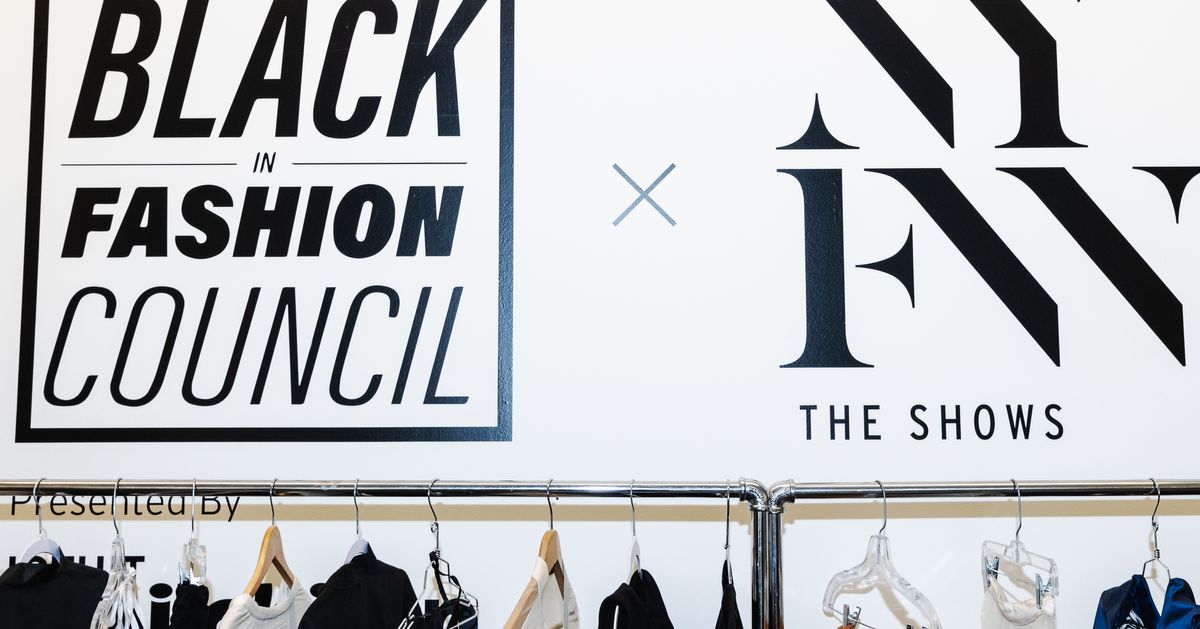 While the fashion industry has made slow strides regarding diversity, equity and inclusion, history has proven that passiveness does not lend itself to progress. Rather than waiting for change to come, we may have to be the change we want to see.

Since its launch in August 2020, the Black in Fashion Council has been at the helm of amplifying and platforming Black fashion professionals. Founded by The Cut Editor-in-Chief Lindsay Peoples and public relations expert Sandrine Charles, the BIFC was created to “represent and secure the advancement of Black individuals in the fashion and beauty industry.” The collective launched its first Discovery Showrooms in September 2020.

For its third appearance at NYFW this year, BIFC kicked off the week with a breakfast and partnered with Mailchimp, the first-ever sponsor of the BIFC Discovery Showrooms, on a limited edition capsule collection and pop-up shop featuring Izayla, Kwame Adusei, Muehleder, Atelier Ndigo and Sammy B. After the breakfast, the designers got to see the showroom highlighting their work for the first time.

Izayla designer I’sha Dunston has wanted to be a part of the Black in Fashion Council Discovery Showrooms since learning about the collective in 2020. She crossed paths with BIFC Executive Board Member William Taswell following an emerging Black designers event at the Beverly Center in Los Angeles. From there, he brought her into the fold. As the 26-year-old designer makes her mark on the East Coast, she brings her Fremont, California, flair with her.

“Izayla is advanced contemporary women’s wear. We’re based in Los Angeles, and the three pillars of the brand are women’s empowerment, integrity and representation,” Dunston said. “My philosophy is I want to grow with the woman. It’s a journey. We’re always evolving. We’re not the same woman as we were a year ago.”

Dunston founded Izayla five years ago and has a clear, crisp vision of the brand. The motif of the collection is transition; from muted, tailored pieces suitable for the working woman to soft feminine palettes in the resort collection preview, Izayla is for every woman on the go.

Harbison’s spring-summer 2023 collection was inspired by his affinity for nighttime gardens and their fluorescent nature as well as his mother’s style. Vacillating between dark and light color palettes, his unique use of baubles, jewels and textures throughout the collection is a testament to his craftsmanship.

“Harbison really revolves around modern femininity, really kind of typified by my mother growing up. I call it utilitarian femininity,” he said. “I was thinking about clothing during the day that works beautifully at night, colors and details that are optimized for the night. We’re looking at embellishments with rhinestones, more electric colorblocking and things of that nature.”

Playing with tulle, unique peekaboo skin exposure and the illusion of weight, Guillory’s collection was an ode to whimsy, magic and romance. Using brown, blush, black and blue tones, his collection references the 1976 production of “The Slipper & the Rose,” a retelling of the classic Cinderella story. A recent graduate of the School of the Art Institute of Chicago, one wouldn’t know that this is only Guillory’s second collection.

Madame Adassa is a luxury ready-to-wear and haute couture line for women. Made in Los Angeles, the line pays homage to Vacirca’s ancestry through clothing that speaks to the “rooted yet adaptive” woman. The spring-summer 2023 collection, aptly titled “Summer Reign,” features golden yellow tones, botanicals and floral elements, as well crinkle taffeta and versatile materials such as 100% Italian silk.

The standout piece of the collection was inspired by Queen Dahomey, the historical female warrior that “The Woman King” is based on.

“What I decided to do with this collection was just highlight women, so it’s a women’s empowerment collection in terms of our endurance and our ability to overcome everything that’s thrown at us,” said Vacirca. “So, I chose Queen Dahomey as the introduction to the collection. It’s a hand-painted canvas gown with all hand beadwork at the side. It’s a collaboration with realism artist in Los Angeles Jade Yasmeen.”

Kumasi-raised Ghanaian designer Kwame Adusei infuses his heritage and sharp West African tailoring into every piece he makes. Now residing between Accra and Los Angeles, the 35-year-old designer prioritizes both functionality and creativity in his clothing, be it denim bottoms or leather vests. From sexy slits and cut-outs in dresses with pockets and a deconstructed take on a blazer, Adusei is fusing genderfluid clothing with West Coast style and his international vision.

“For me, the Kwame woman or the Kwame person is somebody that is where I’m at: on the verge of making it. You’re still on the go, you’re still on the come up. He or she actually wants to be seen and represented, but they also want to look sexy. When it’s time to run, you have to be ready,” he said.

With a Los Angeles storefront, items from his line, such as his leather biker jacket with ruched sleeves, have already been noticed and purchased by celebrities ― notably including Beyoncé. Thanks to BIFC’s strong presence in New York, he hopes to continue to grow and expand.

Right now, Adusei is leaning into custom outfitting and designing, but his vision for his namesake line — and fashion at large — is greater.