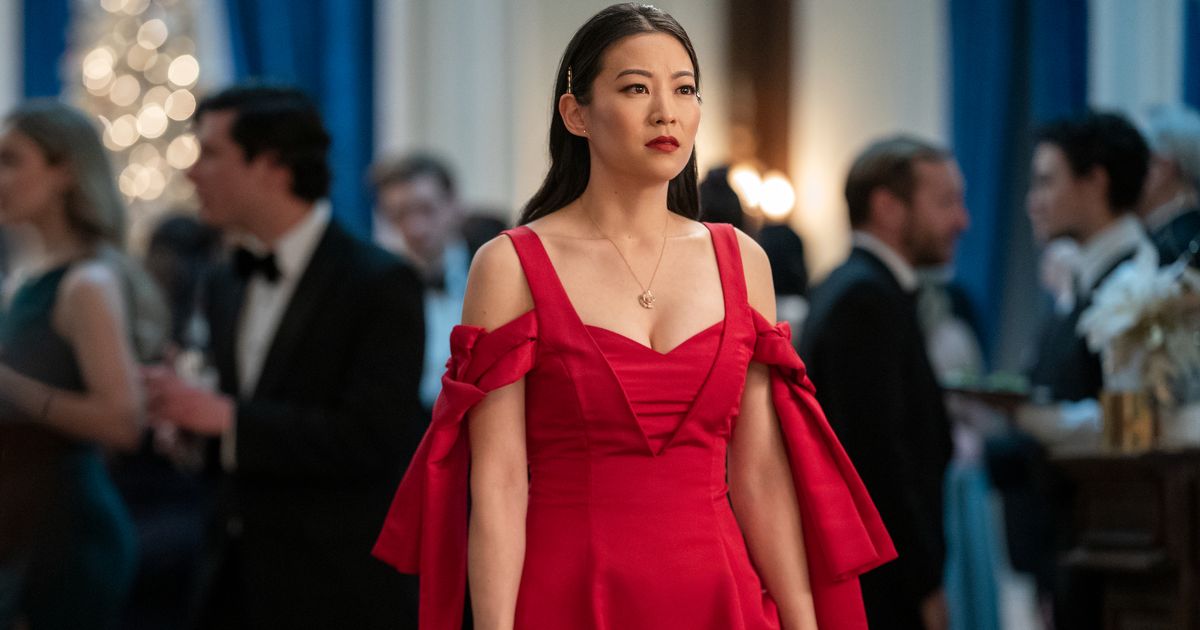 In December 2021, our culture desk at HuffPost assembled a list of “24 TV Shows We’re Looking Forward To In 2022.” One of the most highly anticipated series was Netflix’s “Partner Track,” starring former “Teen Wolf” actress Arden Cho. Since portraying Kira Yukimura in the critically acclaimed MTV series, Cho has appeared in NBC’s medical drama “Chicago Med,” the 2018 film “The Honor List,” and much more. But this would be her first lead role, spreading her wings as a legal eagle.

Starring Cho as Ingrid Yun, a Harvard-bred lawyer working at a prestigious “big law” firm in New York City, “Partner Track” follows Yun as she balances values, passion, and career. An adaptation of Helen Wan’s 2013 novel “The Partner Track,” the Netflix series is created by Georgia Lee and seeks to tell the story of “an Asian American woman trying to break the glass ceiling.” However, culture reporters Ruth Etiesit Samuel and Marina Fang found that the series’ lackluster ability to address identity and marginalization — along with a mismatched plot — actually eroded our excitement for the series.

Ruth Etiesit Samuel: Upon seeing the trailer for this series, I’ll admit I was upset. Since the “Teen Wolf” era, I hadn’t watched Arden Cho in a regular series role in ages. When the series was announced on Deadline, I was expecting a more serious, “HTGAWM” approach — not another story about a woman of color stuck between two random, medium ugly white men. Marina, you’ve read the book “The Partner Track,” which the series was adapted and it’s supposedly heralded in law schools, per the book’s description on Amazon. What are your thoughts?

Marina Fang: Oh, Ruth. I regret to inform you (and our readers) that I was disappointed by this series. I don’t want to spend too much time on the book versus screen comparison because there are a lot of ways to approach adaptations that have their various merits. But overall, I was underwhelmed by the series’ surface-level exploration of what the book is pretty centrally focused on: How race and gender and class intersect in a hierarchal and structurally inequitable industry like corporate law. It’s not that the series doesn’t get into any of that at all. But by foregrounding the rom-com plotline, it misses so many opportunities where it could have gone deeper. In the book, the rom-com elements are there but are far more secondary than they are here.

Look, I love a good rom-com! But I just did not think that was the right approach here. And even the rom-com plots were not good! I was not invested in which one of these mediocre white men she’d end up with.

I think there is a way to bridge all of these different elements: make a fun and entertaining rom-com AND get deep into the structural racism, sexism, and classism of corporate law. I did not think this series did either of those things particularly well.

Ruth, I’ve outlined some broad topics. Where do you land on them, and which of these do you want to get into in more detail?

Samuel: Let’s start on the exploration of identity and marginalization in the workplace, or the lack thereof in a series that is allegedly about those topics. Watching “Partner Track” versus hearing and reading about it felt like a bait and switch. The marketing feels disingenuous — and the story feels too colorblind to be about breaking the proverbial glass ceiling as an Asian American female attorney.

Arden’s character Ingrid is a Harvard Law School graduate with six years of professional experience at this firm and is so damn naive. She genuinely thought her white bosses would do the right thing (Why would you ever believe that at your big age?) after being used and tokenized time and time again. Like, girl, STAND UP! The show does not legitimately grapple with identity until four episodes in. Moreover, she’s almost a side character in her own story and the struggle for those very average white men becomes a focal point. There are so many more interesting threads that could’ve been pulled — from respectability politics and the “model minority” trope to her relationship with her sister. I cannot overstate how annoyed I am with the execution of this show.

I think it would’ve been far more interesting to see her break the glass ceiling, while also navigating a competitive working relationship with her Black gay male colleague and unpacking what solidarity among people of color looks like, privilege, etc. The rom-com just seems so oddly placed in all of this! What do you think?

Fang: Totally oddly placed! And like I said, it’s not that you can’t do both.

You watched the screeners before I did, and I remember you telling me that it would get better about midway through — and you were right! But it was oh so fleeting. Without spoiling, there are moments where the series shows what it could have been and the substance it could have had! But it’s really limited and buried in the middle of the season.

Interestingly, several of the major plot points, where Ingrid comes up against racism and sexism and realizes how tokenized she’s been, are fairly similar to how they play out in the book. Some are slightly altered or presented in a different order. But for some reason in the series, they come out really watered down and just don’t land with the same force. In part, I think it’s because they are happening alongside this uninteresting love triangle.

Ruth, you and I are both “Industry” fans. It’s probably because of recency bias, but I couldn’t help but have “Industry” in mind while watching this. This could have been “Industry.” A wildly entertaining and riveting show that’s also a deep exploration of race, gender and class in a corporate setting, all seamlessly woven together.

I do wonder how much of this stems from us expecting one thing and getting something wildly different.

Samuel: HELLO! I wanted that – or a Michaela in “HTGAWM,” Olivia Pope in “Scandal” moment!

But it felt like the show was put in the incorrect order. From both a subject matter and plot perspective, just completely buried the most interesting parts. And I hate to be that person, but I’m going to be that person. I simply did not understand why everyone was so comfortable with their friends cheating on their partners. LIKE???

I was baffled! Because there was no reason for some of the things that occurred, other than to give us a messy “Emily in Paris”-esque storyline and create some faux-ambiguity for a second season. I swear Netflix will pay for its crimes. If another network picked this up, it’d be different — and arguably better.

Fang: Yep, I wonder about the Netflix of it all. The production quality could have had prestige drama vibes. But it’s honestly pretty mediocre. The aesthetic of the show is so one-note and bland. And the writing just doesn’t crackle. This is a minor example, but there’s a scene when Ingrid’s best friend Rachel finds out her client has died, and she says: “She’s dead.” That doesn’t have to be a written line. We know based on her facial expression! Yes, tiny moment, but I think it exemplifies some of the limitations of the writing.

As the episodes progress, it’s pretty clear the show is being set up for a second season (and Netflix’s head of drama recently hinted they’re hoping to renew it). There are several characters and plot lines that weren’t in the book, likely so the show can open up some multi-season storylines. And the last episode ends on a (not very compelling, I think) cliffhanger. By contrast, the book ends pretty definitively. Again, it’s fine to depart significantly from the book and create more storylines. Sometimes this works quite well, allowing for more depth than the original material. (On the other hand, sometimes you get a “Big Little Lies” Season 2.)

Without spoiling it for anyone who might want to check out the book (and you should), the book’s more definitive ending supports the thesis statement it’s asserting about whether it’s possible to change these entrenched systems. But again, the big problem with this show is that it lacks a clear point of view. It doesn’t feel like it’s trying to say anything substantive.

Samuel: The way the book ends is such a far more enthralling and richer way to delve into another season as well! Instead of all these odd love kaleidoscopes — because they’re barely triangles at this point — I’d want to see Ingrid in her Annalise Keating era!

Samuel: The truth is, I want to love this show. I wanted to, but I just can’t. Like, yes, I want to see an Asian American woman be sought after (though I’d like the suitors to be attractive at the very least… to each their own.) And yes, it’s so refreshing and much-needed to see a Black gay couple in love. And — because multiple things can be true here — it felt a bit… trope-y to make his character in charge of the luxe goods department. And overall, I’d like the story to not be cringy. The dialogue felt forced. The big law attorneys I know don’t willingly listen to M&A podcasts to put themselves to sleep. It’s not soothing!

Moreover, I know people are making the case that POC-led shows should be allowed to be mediocre since we have an abundance of terrible white television — and I get that. But it still does not erase how disappointed I am. I wanted better for Arden. I know she’s immensely talented and I wanted to see her in her character acting bag.

Now that we’ve dwelled on the bad were there any redeeming parts of the series in your eyes? It’s OK to say no, sis…

Fang: Lol. Everything you just said, I feel so deeply. And yes, I am one of those people who has sometimes made the case that maybe the true mark of progress is getting to be mediocre because there are so many mediocre white shows that get to exist. The more shows we get, the less weight each individual show has to carry. And then not every show will therefore be expected to be all things to all people. So maybe it’s OK that this one just didn’t do it for us. But like you said, it’s disappointing. I keep going back to the expectations versus reality. This show had all the ingredients to be an engrossing and juicy show. However, to borrow something from a very different Netflix show, they were overproved and underbaked.

Fang: So, should you watch it?

Samuel: My answer is no, but people will anyway.

Fang: I say yes, but only under specific circumstances: if you really, really adjust your expectations and prepare to mostly turn your brain off. I know, it pains me to say that.