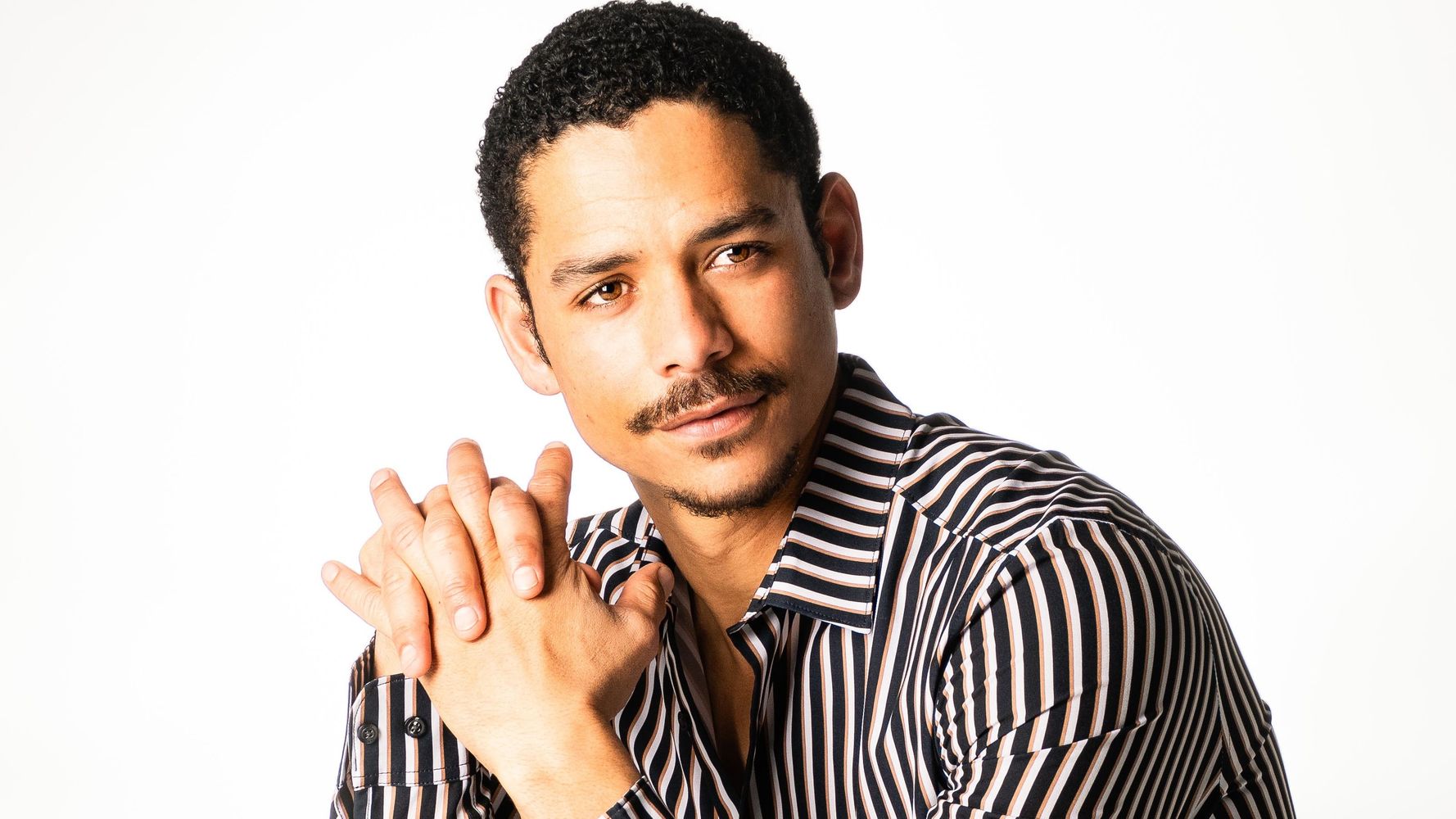 This article contains some spoilers for season two of “Russian Doll.”

Perhaps it’s the knotty feeling of nostalgia that comes from being on “Russian Doll,” or that he’s been organizing every family photo in his childhood home lately, but Charlie Barnett has been thinking a lot about his past and what it really means to be in someone else’s shoes. The latter notion especially rings true if you saw the throwback photo he posted on social media last year of himself as a child donning denim overalls, red pumps and a handwoven bag.

Barnett, 34, laughed when I brought that up at the top of our Zoom video call. That’s partly because it was so long ago that he can’t remember most of the details around what he and his sister, pictured next to him in ginormous cowboy boots, were even doing at the time. And while he’s been spending time in his native Florida caring for his recently ill father, he just so happened to be sorting through the house and digging up all kinds of personal artifacts.

“I’ve only seen two pictures of me in drag as a child, so I don’t think I did it that often,” Barnett recalled. “The only thing I remember from that day — and such a weird thing — [is] my sister and I had tied a Barbie doll to the fan and it got tied up and broke the fan.”

Clearly the mishap didn’t break the children’s stride, because they just turned around to their mother’s closet and started trying on her stuff. “It was just like a … Well, we broke something. Let’s do something else,” he added with a smirk.

But after we talked a little more about this rather common occurrence of being a child and putting on random clothes that clearly belong to someone else, Barnett came to this: “I wanted to feel like an adult.”

It’s an intriguing conclusion to arrive at, especially when you watch his work on the new season of Netflix’s “Russian Doll.” The last time we saw his character Alan Zaveri, the deeply depressive and stunted Manhattanite was struggling to overcome a devastating time loop via the 6 subway line that had him repeatedly dying.

The new storyline jolts Alan back to 1960s Germany inside his grandmother’s (Carolyn Michelle Smith) body. And through proxy, he must navigate her life as an African immigrant and student juggling sociopolitical and romantic challenges far outside what he’s ever experienced.

That means Alan, as Agnes (Smith), finds a new portal for love through his grandmother’s relationship with a complex man as well as an entirely new, albeit immensely fraught, landscape. But it was one that Barnett was interested to dig into.

“There’s a lot of conversation about last season being about death,” he said. “This season is about ‘How do you live?’ And I think Alan is like, ‘I want to figure out what I want from life.’”

But with that new existential perspective must also come the realization that things might not work out exactly the way Alan or Agnes might think, which can be difficult for the former character’s self-controlling nature. “Almost like when you’re baking a cake and you’re like, ′Oh, I’m baking it. This is going to be so good,’” Barnett explained, “and you look over and realize you put salt in it. I got to pick this fucking cake and put it in. Do I make it a savory cake now? What the fuck are we doing?”

The actor asked that last question rhetorically, but there is a real earnestness to it that urges you to consider why, using his analogy, you’re trying to bake the cake a certain way in the first place instead of allowing space for life to happen in between and mess it up somehow.

Of course, the opportunity to manipulate your current circumstances somehow might be alluring for someone like Nadia Vulvokov (Natasha Lyonne, who’s also the co-creator and co-executive producer of the series). The subway throws her back to 1980s New York City in the body of her late mother (Chloë Sevigny), who is mentally ill and pregnant with her.

But for someone like Barnett, and ultimately Alan in Season 2, changing any aspects of his past isn’t appealing. Because then he’d be redefining who he is today. “No doubt that result could be better,” he said. “It could be worse. It’s just a risk that I’m unwilling to take. I think we all through life, as you get older — and of course, depending on you in your own experience — you realize that the bad is just as useful as the good.”

He looks at his own history as a biracial Black queer man who was adopted by white parents when he was 4 years old. “Some people would say, ‘Oh my God, well, adoption, you got left,’” he said. “I, of course, have abandonment issues that I’ve been dealing with. I’ve been lucky enough to meet a lot of my birth family now, which has been incredibly incredible and challenging in its own right.”

Still, it’s like beautiful pieces of fabric that make up a life worth living. “Just from this instance, it sounds like trauma,” he continued. “Would I ever take it back? Are you kidding me? It’s made me have compassion in ways that I never could understand. It’s made me realize characters in different ways that I think anybody will ever be available to.”

Barnett stopped himself before really getting into “the scope of life,” which would have admittedly been a welcome addition to our conversation. Instead, he doubles down on his previous statement: “It goes the same way for being queer, for being Black. All these things that are seen as challenges obviously are fucking the greatest gifts that we’ve ever been given.”

This empathy compelled him, for instance, to really think about the impact of being a biracial Black man portraying an immigrant Black woman in a different era and country — and with many of the scenes being of him living as Agnes and not her in her own body.

“I don’t want to be taking over a Black woman’s storyline, literally,” he recalled thinking. “I was like, ‘This is fucked. That shouldn’t be.’ Thankfully, Natasha was willing to hear that and incorporated a lot more of Carolyn to see her in the situation, in the moments, more than just my own reality.”

Barnett still did research to understand the type of circumstances Agnes could be coming from, a backstory we sadly don’t see much of in “Russian Doll.” Like, as he says, the fact that many people, mostly men, from countries in Africa like Congo and Nigeria were recruited by Germany to join their communist agenda.

“East Berlin put out a point that they were like, ‘We see the world slipping from us,’” he said. “‘We see this communist regime being ousted, so we have to change that.’ They took the opportunity.”

Barnett then caught himself to make a necessary self-edit. “I don’t say ‘we,’ including myself in a communist world, just do it,” he said. “Fucking Florida will love that.” Right.

There is also the fact that Agnes would have had myriad sexist and racist interactions that could have been dangerous for her. And, as Barnett noted, romances with white Germans like the one she has with Lenny would have certainly resulted in her arrest. “Not to mention the men that you’re already traveling with,” he added as his eyes welled up. “There are stories of that being part of the complication. You’re going for your education and to come out a higher and better person … I’m getting emotional thinking about it.”

So, how does a series like “Russian Doll,” a dramedy/sci-fi blend that really defies all categorization, balance something like that while also telling this larger story about processing and teaching yourself how to live through past traumas?

It comes down to the writing, of course. Some of that is the addition of scenes like when Nadia and Alan are playing chess, in the midst of their respective time travels, and he’s grappling with these realities he’s experiencing through Agnes’ eyes. And trying to leave his own inclinations out of it.

The actor definitely makes an excellent point about the implications of a story like Agnes’ and the need to get it right. To the credit of Lyonne, as well as co-creators and executive producers Leslye Headland and Amy Poehler (to whom Barnett gives props, saluting the “literally” all-women writers room), “Russian Doll” still manages to pull off much of what it tries to do. And in increasingly mind-splitting and heartrending ways, it even surpasses its superb last season.

So maybe there is something to this notion of relinquishing control of our expectations or abandoning the opportunity to maneuver what has already happened to fit a more desired outcome. Because there is always going to be another, more appealing outcome. That’s something Barnett has come to realize, particularly throughout his multiple journeys as Alan.

“So much of ‘Russian’ is so personal,” he said. “It’s hard to see where life begins and the work ends sometimes and I take a lot of my experience around it and apply it back. Even walking away being like, ‘No expectations, ride the wave, enjoy it.’ When it ends, swim back out.”