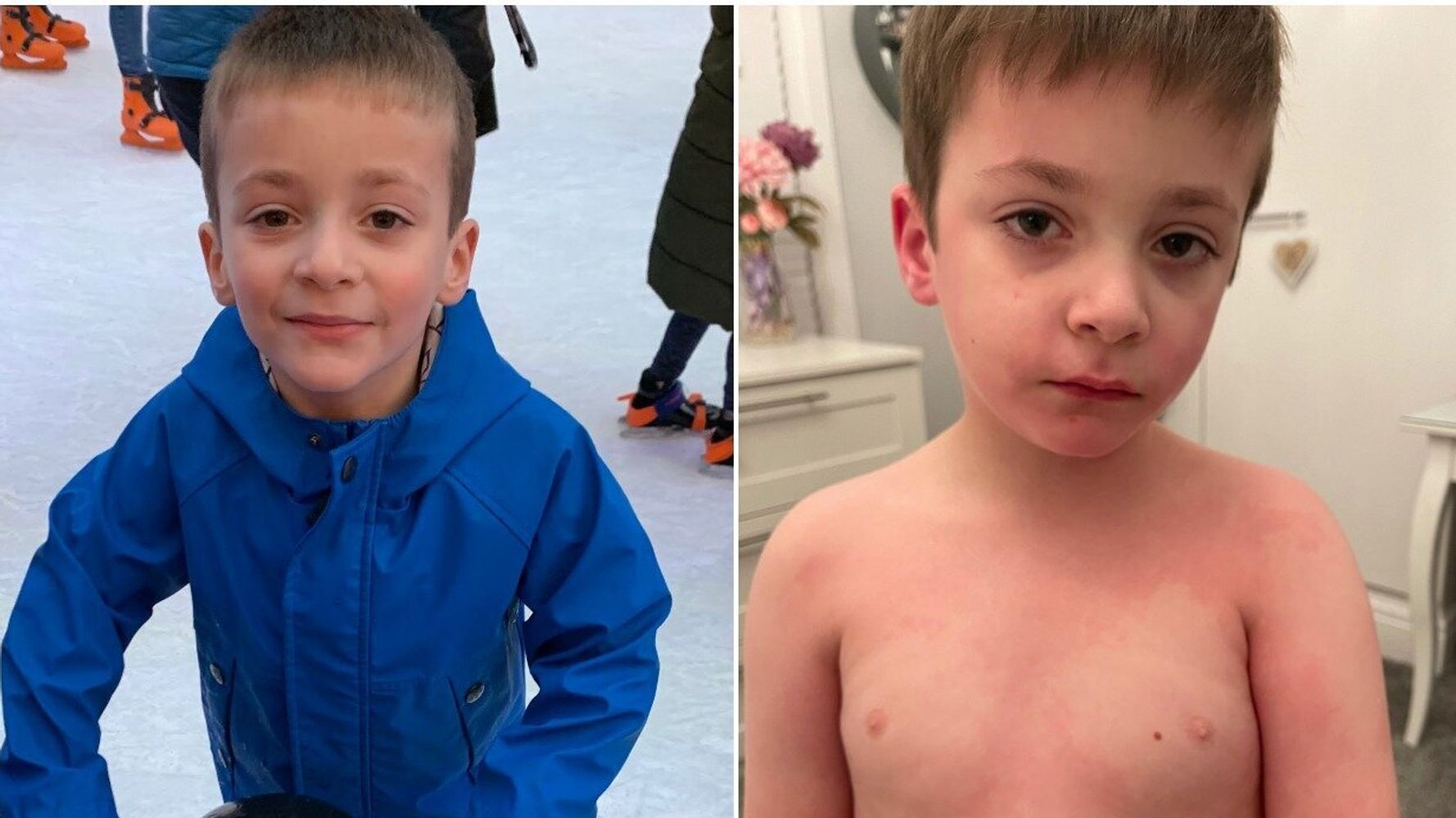 “He’s like a six-year-old in a 90-year-old’s body,” says Chris Ward of his son Thomas, who first fell ill last February with a fever, breathlessness and aches all over his body.

Thomas was assessed at A&E where the family was asked if they’d been to Italy – they hadn’t. They were sent home with instructions that it was a viral infection and Thomas, then five, needed to rest.

Flash forward almost a year and Thomas is still suffering – tests have since revealed he has Covid-19 antibodies. Every two or three weeks, his temperature soars. His glands are constantly enlarged and his body aches most days. Ward recently caught him walking up the stairs like a crab because of the pain.

His case might seem unique, but it is thought Thomas is one of hundreds of children in the UK who are still not back to full health after having Covid.

Parents have told HuffPost UK they feel helpless at how much their children’s lives have been disrupted by common long-term symptoms such as fatigue, body aches and headaches – among many other debilitating symptoms.

Long Covid describes signs and symptoms that continue or develop after acute Covid-19, according to guidance from the National Institute for Health and Care Excellence (NICE). The issue is not widely recognised in children.

It’s been a drawn-out fight by campaigners to get the issue acknowledged in adults, which resulted in clinics being opened in the UK throughout 2020. Now, parents are fighting for the plight of their children to be recognised, too.

Layla Moran, an MP and chair of the All-Party Parliamentary Group on Coronavirus, recently addressed the plight of parents and children with long Covid in a House of Commons debate on the topic. Evidence of children suffering with long Covid is building and robust research is needed, she said.

Moran says long Covid is the “hidden health crisis” of the pandemic. “We know long Covid affects kids too, but the way in which it affects children is even less understood than how it affects adults,” she tells HuffPost UK. “Government needs to start understanding the effects of long Covid in kids, particularly because it needs to count long Covid when considering reopening schools.”

It’s not clear how many children are struggling with long-term symptoms. This data hasn’t been collected and often, it’s impossible to say whether some children had Covid, as tests weren’t widely available when many became ill.

Data estimates from the Office for National Statistics (ONS) suggest five weeks after testing positive for Covid-19, 15% of secondary school children and 13% of under-12s are still struggling with symptoms.

In a bid to raise awareness of the impact the virus can have on children, parents whose children are suffering with long-term symptoms have joined forces to form an action group: Long Covid Kids.

The group includes some 600 families, says co-founder Sammie McFarland, 44, from Dorset – representing roughly 800 children, including children from Black, Asian and minority ethnic backgrounds. Not one child has recovered to full health since first becoming ill, she tells HuffPost UK.

Yet parents reported experiencing “medical gaslighting”, says McFarland, where they have been told by doctors that their kids have anxiety or that Covid doesn’t affect children. Others are simply frustrated nobody can help – an experience shared by parents in the US, too.

McFarland started the group with Frances Simpson, 42, from North Yorkshire. The mothers were united by their feeling of hopelessness when their children weren’t recovering. They were determined to take action and find other families impacted to prove it was not something they had made up.

McFarland and her daughter Kitty, then 14, both fell ill in March 2020. At first, McFarland struggled with a sore throat and headache that wasn’t going away – she had isolated, however as the 14 days were coming to an end, she heard her daughter coughing in the shower and decided to lock the family down.

These symptoms come in clusters – but the fainting, dizziness and weakness have been constant. Having long Covid has impacted Kitty’s mental health, particularly the isolation from not being able to take part in normal activities. When schools returned in September, Kitty still wasn’t well enough to go back.

To have my child ask: ‘when will I get better?’ and not be able to give them a response is really difficult.

Kitty has struggled with the fact medical professionals don’t know how to help her. The family saw a consultant in October and Kitty pinned her hopes on a potential treatment – but they had no answers. “She came away bereft from that appointment,” says McFarland. “Her one chance of getting better, as she saw it, was taken away – the person she wanted answers from had no answers.”

More recently, Kitty’s health has begun to improve. Where once she was spending most days in bed, she can now be out of bed for nearly half a day, her mum says. It has come as a relief to the family after so much uncertainty.

Frances Simpson and her two children have been dealing with suspected long Covid since March 2020. Simpson, a university lecturer, was the first in their household to come down with symptoms.

As the weeks progressed, Saskia started feeling faint and dizzy – she could barely eat. Magnus would be fine and then a few days later, would say he couldn’t see properly, or that he felt sick. The nausea and sickness has gone on for 10 months in both children – and to this day, Saskia is unable to eat properly, sometimes living off milkshakes.

“It’s been awful,” says Simpson. “Even just talking about it and remembering the early stages, I can feel the anxiety coming back again.”

Single mum and childminder Karen Hill-Jones has two children, a son aged 12 and daughter aged nine. All three of them have been struggling with long-term symptoms since becoming ill in February 2020.

The 41-year-old from Hackney says her children have suffered hot sensations in the head and down the spine, insomnia, heartburn, weakness, and exhaustion. The trio can’t leave the house more than a couple of days a week as they have to rest in between. “Even gentle walking seems to set it off,” says Hill-Jones.

In September, her children returned to school, but the 15-minute walk knocked them for six. They spent the following week in bed.

The prospect of not getting better is taking its toll on her children. “For my daughter – who up until fairly recently was the most ill of us – just being in pain every day of her life and not knowing when she won’t be in pain, I think that’s quite a profound psychological thing to process, even for an adult,” she says. Recently, her daughter said to her: “I’m just really scared that this will never be over.”

All of the parents HuffPost UK has spoken to have either been told, or have witnessed their children being told, not much can be done to help them at this stage, as not enough is known about long Covid in children.

“That’s unusual for children because they’re used to adults being able to give them answers,” says Hill-Jones. “But at the moment nobody has any answers, so there’s this very profound uncertainty that I think really upsets them.”

When will the struggles of these children be acknowledged? MPs – such as Moran, and Andrew Gwynne – as well as doctors, are calling on the government to do more to recognise long Covid in children and fund research into this area.

HuffPost UK understands paediatric services are receiving referrals for children with symptoms suggestive of long Covid – and the government is aware of this.

“Paediatricians, GPs and child psychiatrists are concerned about the long-term impact of Covid on children and young person’s physical and mental health,” says Professor David Rowitch, an expert in paediatrics at the University of Cambridge. “Apparent symptoms include fatigue, abdominal and musculoskeletal pain as well as anxiety and depression.

“A starting point is research to understand how common long Covid is in children and young people, as well as advocacy to commission appropriate clinical support pathways in the NHS.”

Long Covid Kids wants more recognition of the issue. The group is asking the government to create an awareness campaign to teach people about the symptoms to look for. They also want to see these symptoms acknowledged by the NHS so parents can access tests for their children. Accessing testing can be hit and miss, as children don’t always present with symptoms set out by the NHS. Common symptoms in children are: fatigue, headache, fever, sore throat and loss of appetite. One in six children also present with an unusual skin rash.

When HuffPost UK asked whether the symptoms could be changed or updated, an NHS Digital spokesperson explained the power to do this lies in Professor Chris Whitty’s hands: “The NHS website’s description of the main symptoms of coronavirus is based on the Chief Medical Officers’ statement of May 2020 which defined, on behalf of the UK Government, the Covid-19 symptoms requiring action from the UK public.”

Should the Chief Medical Officer for England update or qualify this definition, the change will be reflected on the NHS website, they added.

A Department of Health and Social Care spokesperson says the government is continuing to work with scientists to improve collective understanding of the impact long Covid has on people of all ages – “making sure we deliver the best and most appropriate support possible to affected individuals”.

Parents and young people who are concerned about new, ongoing or worsening symptoms more than four weeks after the start of Covid-19 symptoms or a positive test are urged to discuss these with their GP.

HuffPost UK understands that NHS England is also running a workshop on long Covid to discuss how best to develop a case definition and model of care for children in conjunction with the National Institute for Health and Care Excellence (NICE) and the Royal College of Paediatrics and Child Health (RCPCH).

A spokesperson for RCPCH tells HuffPost UK paediatricians are aware that some children may experience long Covid and are “learning more about the best way to treat them”. “We are hoping to see more research into this area so that we can find out how many children are affected and in what way,” the spokesperson said. “We also hope to learn more about whether the impact of lockdown could be exacerbating the condition in some children.”

For some parents, like Ward, the hope is that research will eventually provide them with answers as to why their son is still so ill – and whether he’ll get better.

Until then, he and his wife are simply counting down the days until Thomas’s next episode – they tend to occur every 15-25 days. “It’s just a constant worry – and you just don’t know what the long-term outlook is,” he says.

“You don’t know if it’s causing any severe problems in the future for him, you don’t know whether all this stuff is damaging some organs or is going to cause liver damage in the future, because they [the doctors] just don’t know.”